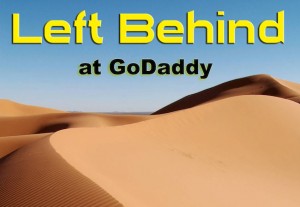 No doubt you have heard of the Left Behind books, for Evangelical Christians being left behind means not being taken up by their Sky Monster, but what does the phrase mean to an atheist, vegan, hippie with a serious web jones?

I don’t worry about any deity leaving me behind, if I need to act I act, I don’t sit around waiting for invisible friends to save me. It’s my websites that better be worried.

At one time I owned nearly 200 domains, most were used as affiliate shopping sites, and of those most were linked to Amazon. Three years ago when Jeff Bezos and Jerry Brown were fighting over sales taxes Amazon suddenly dropped all of their California associates, so that was the end of that. Roughly at the same time GoDaddy was a constant irritation for me with their constant, obsessive, trade up attempts. I also was not a big fan of their CEO shooting elephants. Then there was their support for draconian legislation from Congress that was widely opposed on the web.

So a few years ago I started moving my surviving domains to Namecheap, most of the stores are gone, but I still have maybe 80 domain names. Being Left Behind in the context of Skeptic Hosting is what happens to unloved domains left hanging at GoDaddy while the chosen get transferred to Namecheap.

The best survival strategy for any domain of mine that wants to be continued is, of course, making fun of religion.